It's hard being Mommy sometimes...

It's been a rough start of the school year emotionally for this momma...Harrison has commented that he feels lonely at school (one bus buddy moved to Everett and the other switched schools). So he is solo on the bus. He said he often walks around the play ground alone in the mornings. I asked if other kids from another bus are unloading at the same time and maybe he could play with them. He also mentioned “I know I have red hair and I’m different”. Harrison attends karate after school on Monday and Wednesday (WKA picks him up from school and then I get him from karate after his class). Harrison mentioned that no one wants to be his friend (I think at karate). I paused, choked back tears and said he was funny and had the best imagination I have ever seen and the other kids are missing out!

Maybe this is first month/getting used to life as a second grader...regardless I’m so Blessed that he is telling me and opening up!

It’s hard to be a mommy sometimes! Yesterday I cried big tears because of Lewis still being sick and how much I hate when either are in pain...Harrison rubbed my back and said it’s going to be okay and then made me a picture. 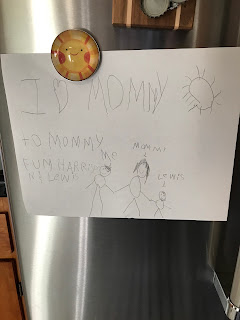 sounds like a HARD week! I get it! J sat by himself at recess for the ENTIRE year last year as the new kid at school....but he was ok with it. It's just hard to watch though! This year, he's playing soccer with friends and loving it.

Praying that you'll be a place of love and grace for that sweet, red-headed boy of yours!!